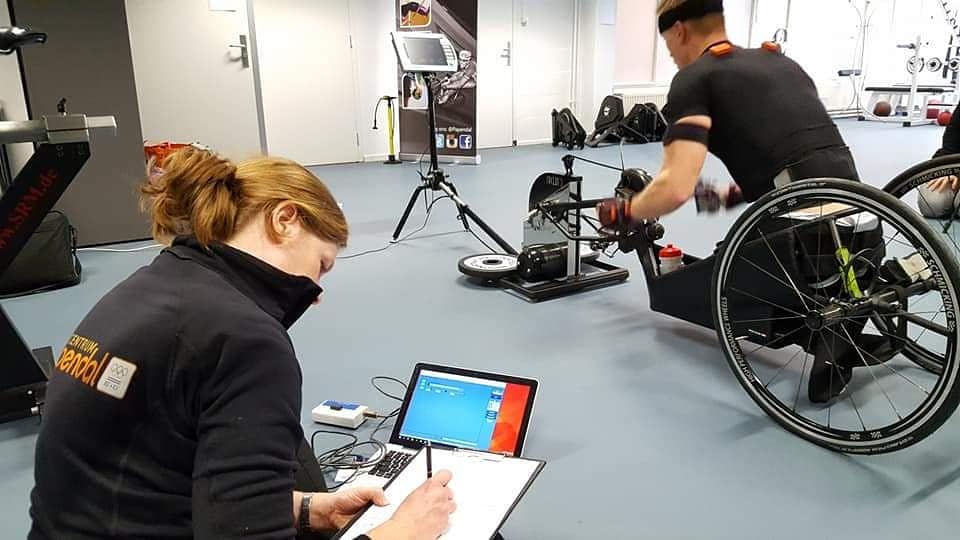 “Without an aerodynamic handbike, you will never finish on the winner’s podium”

The handbike is also called the Formula 1 of cycling. Indeed, the materials play a very important role. No wonder World, European and National Champion Mitch Valize is working at Brightlands Chemelot Campus on the innovation of its handbike.

He had a good season, clinched his titles again and added two more. His secret? Live like an elite athlete. His schedule can be compared to that of professional cyclists. Mitch Valize averages between 25 and 27 km/h on his handbike and the pros are around 30 km/h. “They do more kilometres, even if in terms of hours, it’s comparable. We are a little more in the force zone. Will he also venture into the hills? “Just last week I cycled from Heerlen to Monschau via the Ardennes and back via the Eifel. It is 150 kilometers in distance and 2000 meters in altitude.

Cycling is a material sport. “You can be as good as the best, but if you don’t have an aerodynamic or lightweight bike or handbike, you’re never already going to finish on the winner’s podium,” says Mitch. Elite athletes, say the top twelve in the world, use lightweight carbon frames and aerofoil ditto fairings. Athletes who ride aluminum bikes, mostly beginners, don’t stand a chance.

Unlike professional cycling, there is room in handcycling to improve materials. This mainly involves focusing on aerodynamics.

“That makes all the difference. In my class, rear wheel position is really important. These are in camber, just like the front wheels in Formula 1, and that is only possible with carbon frames. When it comes to aluminum bodies, the wheels are usually just straight and the frontal area is larger. You normally sit in alignment on a racing bike, whereas we have our rear wheels next to us, so there’s a lot to be gained if you can position them more efficiently. Also, a lot of things are copied from the world of Formula 1.”

There are two major manufacturers in this sport that supply handbikes. One is Spanish and the other American. Three-quarters of the peloton ride materials made in the United States, the rest ride Spanish bikes. Mitch Valize: “The American models are slightly longer, so you benefit from that on flats. The longer they are, the more aerodynamic they are. But in the turns, you are dealing with a bigger turning radius and you lose a bit of time because you have less maneuverability. It then comes down to the athlete himself. I can make up for that time in the corners by being more agile.

Valize’s handbike is constantly being innovated at Brightlands, especially at the Chemelot Innovation and Learning Labs (CHILL). He became an Olympic champion in Tokyo with custom grips made there. “To a certain extent, my medal belongs to them,” Valize says, expressing her gratitude.

His bike for the Paris Paralympics (to be held in 2024) is already being assembled. By the way, such a handbike costs around 20,000 €. The frame alone is around €12,000. He could not do without sponsors. Little progress can now be made in terms of framework innovation. “These are carbon, stiff and light, which is important for handling on the road. One area where we can make gains is in bicycle components. “

Every Sunday the best articles in your mailbox!

“All the cables are concealed on the racing bikes. This is a problem with us. The gears are already fully electronic so we no longer have a visible cable there, but that is not the case for the brake cable. It’s on the handlebars but also on the pedals of the bike on the bars, so it spins all the time. Therefore, you have a cable running from the brake handle of your pedals to the brake of your front wheel. We want to get rid of this cable but we can’t because it would turn on itself. That is why, together with CHILL and its partner TSG Group, we are developing articulated gear couplings for the handbike.

“This technology already exists but has not yet been applied in the bike industry. Eliminating this cable provides many aerodynamic benefits because you no longer have a cable whipping around in the wind all the time, it doesn’t not interfere as much with the surrounding air.

And what would that give? “We know from racing bikes that if you get rid of the cables you quickly realize a five and ten percent gain. However, in the case of the race bikes these cables remain fairly stationary, whereas on ours they move around, so we would expect the gain to be up to fifteen percent. We then speak of time savings of tens of seconds. This cable not only creates air resistance, but also rolling resistance as it hits your frame with every rotation. 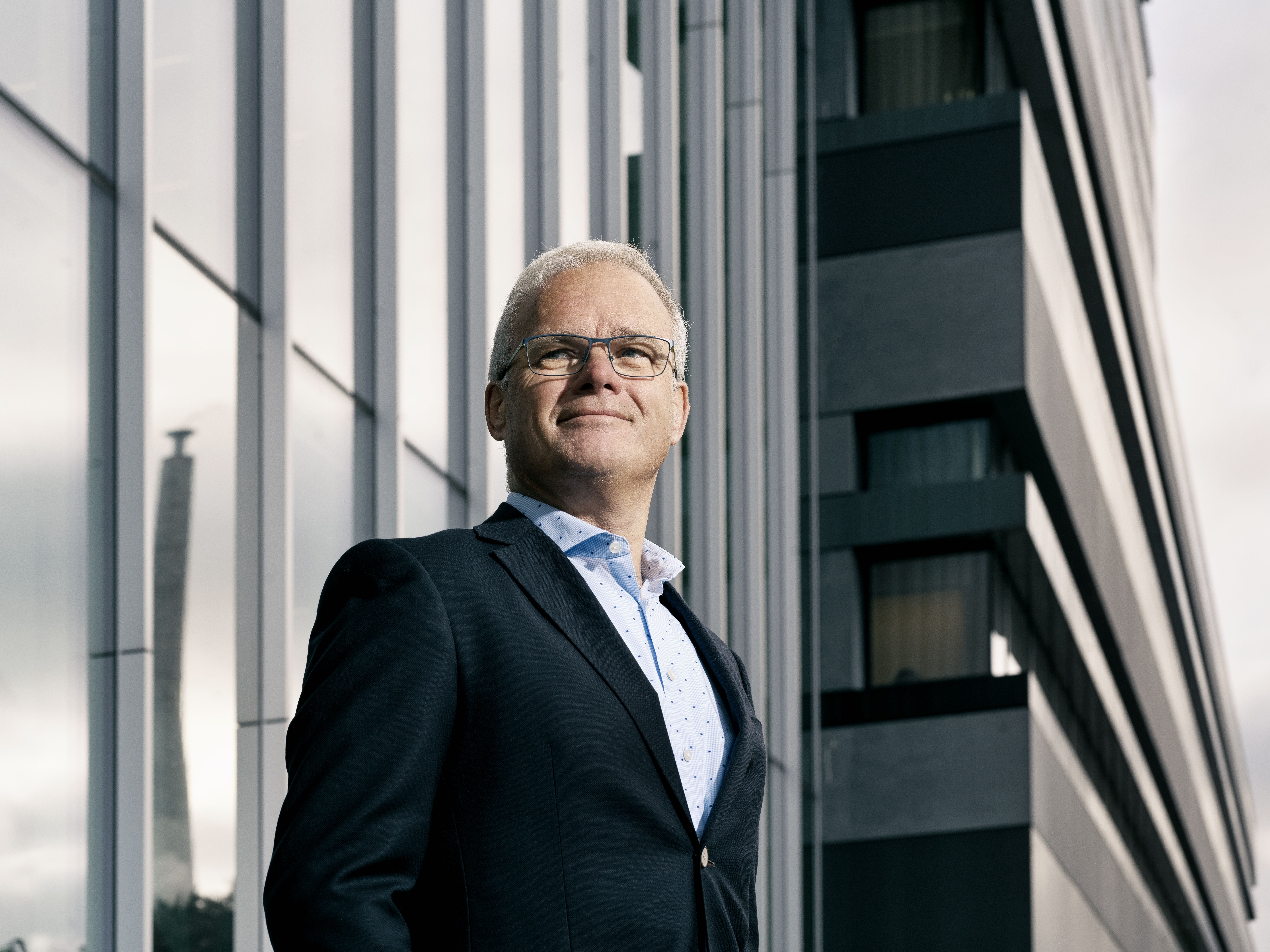 Luc Lanclus, CEO of CHILL ten years, does he have any particular hope for the next ten years? “Certainly, there will be many more CHILLS”

Mitch and his team hope to test it next year so the entire Dutch handbike team can ride it in the 2024 Paralympic Games in Paris. And the competition? “Of course they will be interested but then they will have to pay for it. At that time we will already be looking at innovations for the Games in Los Angeles. That’s how we hope to stay ahead.

Mitch Valize thinks of cassettes, chainrings and carbon disc brakes to make his handbike even lighter. “You get a bit more weight on the bike using disc brakes because they are a bit heavier than rim brakes. But by adding carbon chainrings and disc brakes we can reduce the weight even further. They already make some for the Moto Grand Prix and now they have to fit the racing bike wheels as well.

He also hopes to make more gains by making improvements to the wheels. “Because our rear wheels are angled these days, they don’t run over the tread but rather over the sidewall of the tyre. We will now examine the effect this has on rolling resistance. We are going to do a test setup with parts that have a testbed and run some tests. Maybe we could make tires that we move the tread to the side. Or, on the contrary, we have to make completely different rims so that the tire no longer rolls obliquely on the asphalt but straight on the asphalt.

As is the case in Formula 1, spray in rainy weather is a problem. This problem must also be solved in an innovative way. “No standard mudguards fit handbikes. We will also explore with CHILL if we can print our own brackets that we can click onto the bike so we have less trouble with spray during practice sessions. Due because of their aerodynamic advantage, you are not allowed to ride with fenders in races.

Also, according to Valize, the rear wheel hubs can be upgraded. “These are the heaviest parts of the whole wheel, so they can also be made lighter. We found a way to do that. By 3D printing the hub and axle, you can potentially create a lighter hub. If we do this, we can again make gains over the competition.