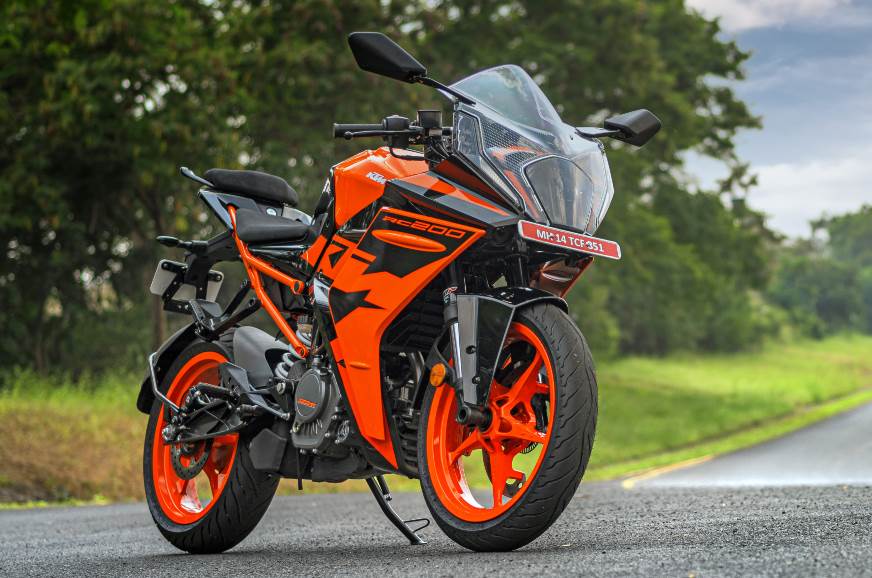 The much-loved KTM RC 200 receives its biggest update since its launch in 2014.

A new KTM is always exciting news, especially when it comes to an update for a bike that has changed very little over the past seven years. The first of the new generation RCs to hit our market is the RC 200, and we were able to spend some time with it on the Bajaj test track in Chakan. As before, most of the changes will affect the entire RC lineup, including the new RC 390 which is expected early next year, so here’s what to expect.

The biggest change is what looks at you and that is the new design philosophy. The new RC has a much larger face and, in typical KTM fashion, it’s a unique and rather original design.

Compared to the old RC, the new bike has a more upright stance with a larger front section and a taller, more rounded windshield. KTM says this bike has better aerodynamics than before and the wind protection we experienced was quite good. The bike looks more cohesive in person than the pictures suggest, and while the face isn’t as sharp and aggressive as the old bike, it definitely stands out. If anything, this bike probably has even more presence than the old one.

The RC 200 is now fitted with a full LED headlight (only the RC 125 is now fitted with a halogen lamp), while the LED indicators and position lights are now placed next to the main headlight. The new fairing uses a wider layered design which gives the bike a greater sense of presence. The rear section now looks longer, with a completely different rear seat design and a sleeker LED brake light. A new set of Duke-style grab handles will also make life easier for the passenger. The new RC 200 is available in the black orange scheme you see here and a striking combination of orange and gray. 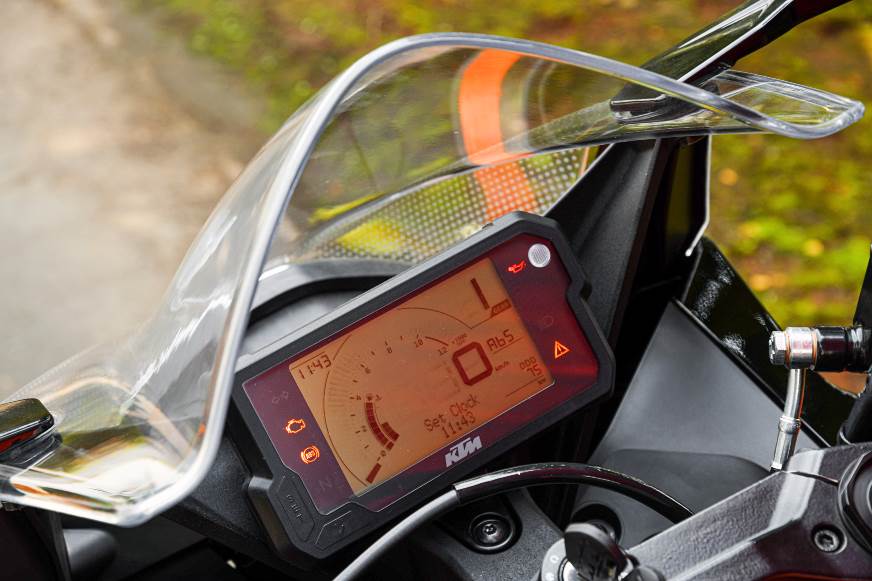 There are also some nice novelties in the little details. The bike receives new foldable mirrors and the two foot levers now have foldable ends – although the hand levers are not adjustable. The RC 200 also receives an LCD screen that comes out of the 250 Adventure. Only the new RC 390 should have a TFT display, but this LCD display on the RC 200 is much larger than before, yet still quite informative and easy to read. We noticed a bit of ghosting on some of the screens during the launch event, but Bajaj says that will be fixed by the time the production bikes hit showrooms.

Whatever your take on the design, you’ll definitely like what KTM has done with the riding position. The position of the footrests is the same as before, but the clip-on bars are now a little higher. It’s not a huge difference from the old bike, it’s something you’ll notice and enjoy on longer rides. For those of you who want it like the old bike, the clips can be lowered 14.5mm, but this will require the use of certain spacers which will be available at KTM service centers.

The biggest improvement, however, is in the seats. KTM claims the same saddle height of 835mm, but the seats are now flatter, better padded and much more comfortable than the old bike. They also get stylish covers that feel quite upscale and are nice and grippy. KTM says they’ve also reduced the section where the seat meets the fuel tank, but anyone below 5’7 “will likely end up tiptoeing with this bike.

For 2022, RCs are getting a new frame with a bolt-on subframe. The main frame is pretty much the same as before, so there is no change in the steering geometry or the wheelbase. Perhaps the most relevant change for customers is that the fuel tank now holds 13.7 liters compared to the tiny 9.5 liters of the old RC.

Despite the extra weight of the extra fuel, the RC 200 still weighs the same 160kg as before, as KTM has managed to reduce over three kilograms of unsprung weight in areas such as the rear chain sprocket, the new drive disc. front brake and the wheels themselves. And if you are worried about these wheels, KTM assures us that they are not only lighter, but also stronger than the ones they replace.

As for the suspension, the USD 43mm fork has 10mm more travel, but the rear remains the same. There is no suspension tuning on the RC200 other than rear preload, but hopefully we will finally get this feature on the Indian spec RC 390.

On the track, the RC 200, unsurprisingly, feels very familiar. It’s a bike that loves corners and it puts you in a position that encourages you to go on the attack. It’s still a 160kg machine, which means it doesn’t feel super light on its feet, but the bike is pretty stable. And without all the extra power of the 390, the RC 200 is also more forgiving of any mistakes the rider might make.

The RC has always been a great manager and there is nothing new to take away from it. Maybe the lighter components made it a bit easier to change direction, but we’ll have to ride it back to back with the old bike to see if there are any differences. It’s always a lot of fun, but don’t think of it as a small road-approved racing bike. Just like before, the rear shock is quite flexible and you will end up wanting more of the brakes. 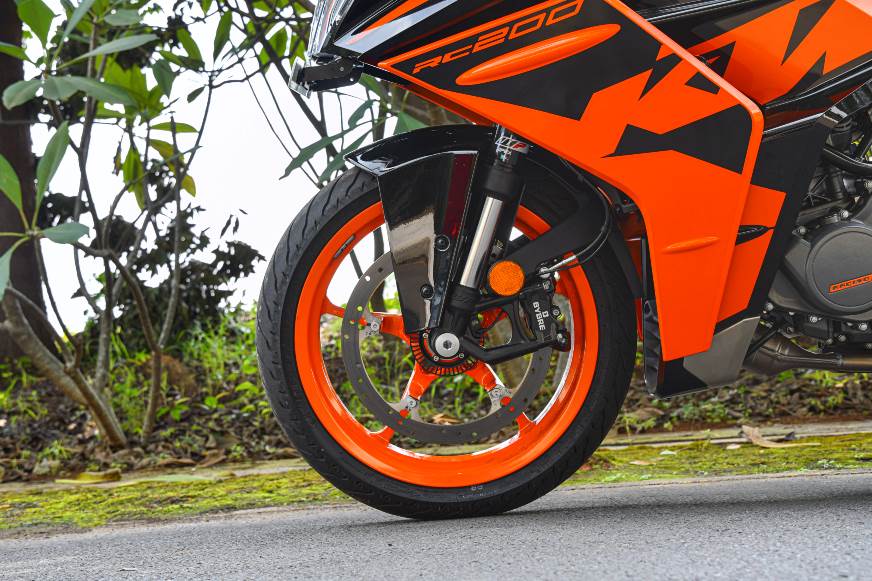 To be fair, the soft rear spring rate has never really been an issue unless you’re a rather heavy rider, and KTM have tried to improve the brakes as well. With this update, the entire RC range now has a 320mm front disc whereas the old RC 200 used a 300mm disc. It’s definitely an improvement, but the brakes are still not as precise as we would like on the track. For most road users this level of performance will be fine, but if you plan to follow the bike you will probably want to look to more aggressive brake pads or an aftermarket master cylinder.

Another thing that holds this bike to the beat of the race track is the MRF Revz tires. Again, they’re perfectly suited to road speeds, but they’re not very reassuring when you start to explore the limits of traction.

As for the ABS, it is a dual channel system like before, but you now have the option of deactivating the rear ABS.

The most familiar aspect of this motorcycle is its engine. The 199.5cc liquid-cooled single cylinder is in the same specifications as the current BS6 RC 200 and there is no change in the horsepower and torque figures of 25hp / 19.2Nm. However, the newer RC gets a 40% larger airbox and KTM claims this provides better throttle response and a stronger torque curve.

Another thing that should be an improvement in the real world is what the heat management will look like, as newer RCs now have a larger curved radiator and that should help the bike run a bit cooler.

Beyond that, the RC200’s motor is very familiar and it continues to run with very short gears which make it a lot of fun to use, especially on the street. On the track, however, you have to be careful to be in the right gear, as it’s easy to fall out of the power strip or bump into the rev limiter.

On the long straight to the Chakan test track we saw a speedometer showing a top speed of 142 km / h, but that was with the help of a very smooth descent. When it comes to acceleration numbers, Bajaj quotes a 0-100 time of under 12 seconds, but that’s something we’ll test for ourselves when we get the bike for a full review.

Nonetheless, it’s still a small engine with character and it’s a lot more engaging than KTM’s bigger 250cc engine. Another thing to note is that this BS6 engine has a smoother and more refined sound than the original 200cc engine, but it’s still a very KTM sound that encourages you to keep cranking the engine.

That sums up the changes on the new RC 200 and enthusiasts will be very happy that this bike is the same price as the outgoing model. It’s no sportier than the one it replaces, but it’s still just as fun, while also bringing in extra features, comfort and usability, and that’s always a good thing. Keep in mind that this is an introductory price and will increase at some point in the near future.