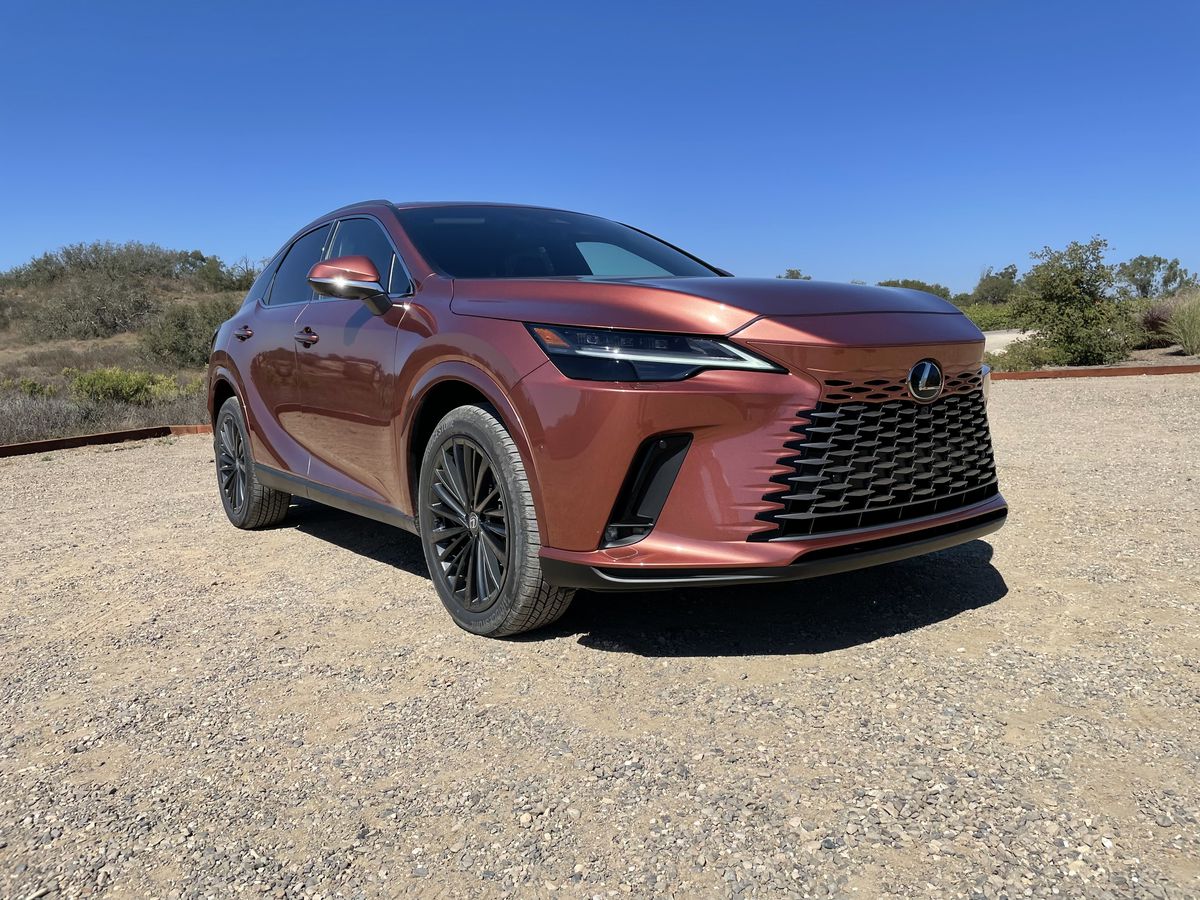 Review: Three electric options give the redesigned, market-leading Lexus RX an edge over the competition

Lexus may be the fourth best-selling luxury car brand in Canada, but it’s the undisputed market leader in the popular midsize SUV category. The RX accounts for about 40% of Lexus sales in Canada and the company hopes the all-new 2023 model will boost sales even further.

“We are hoping for a 20% increase in sales this year,” said Martin Gilbert, Lexus Division Manager, Toyota Canada at the RX’s international launch in Santa Barbara, Calif., in late August. He added that Lexus still breaks records even at the end of an aging model.

Lexus broke barriers when it launched the RX300, the world’s first luxury crossover SUV, in 1998. Almost twenty-five years later, the fifth-generation RX is completely redesigned for 2023. Among the changes are four new powertrains – three are electrified, including the first nameplate plug-in hybrid electric (PHEV) variant. All models, except the PHEV which will be manufactured in Japan, will be built at Toyota Motor Manufacturing Canada, or TMMC, in Cambridge, Ontario. It is the only factory outside of Japan to build the RX. More than 1.6 million RXs have been built since production began in Canada in 2003.

Canada is also important for Lexus for sales. Canada is the fourth largest market for Lexus, behind the United States, China and Japan.

Our route started in Santa Barbara, driving about 100 kilometers northeast to Santa Maria in the conventional hybrid, the RX 350h AWD. It is powered by a 2.5-liter hybrid inline four-cylinder engine mated to a continuously variable transmission. It generates 246 horsepower and offers better fuel economy than the outgoing V6 engine, which was dropped for 2023 in all models in favor of more fuel-efficient four-cylinders. Although it’s quiet and confident, at times the engine thrashes and the CVT groans when pushed. But you won’t find this problem with other versions.

The RX 500h AWD is spirited and lively thanks to a performance hybrid that combines a 2.4-liter turbocharged four-cylinder engine with a single electric motor and a six-speed automatic transmission. It produces 366 horsepower and 406 lb-ft. of torque. It is responsive and perfectly hugs winding and hilly roads. Off the line, it’s quick and nimble—there’s no hesitation or difficulty when accelerating or merging down the 101 North freeway. Driving the PHEV variant, the RX 450h+, is even more impressive. It combines a 2.5-liter four-cylinder engine with a high-output 18.1 kilowatt-hour lithium-ion battery and permanent all-wheel drive. Many details, such as power, fuel economy and electric range, are still not available. The PHEV is dialed, quiet, powerful, and feels like a gas-powered vehicle. There is a gasoline-only variant, the base RX 350 AWD. It has a 275-hp 2.4-liter turbocharged four-cylinder engine mated to an eight-speed automatic transmission, which is smooth and shifts with precision. I prefer it to other transmissions. Where the gas model fails is in fuel economy. The gasoline version consumes an average of 9.8 liters per 100 kilometers in combined highway and city driving; while the RX 350h returns a frugal 6.5 and the RX 500h an average 8.7.

All RXs have five seats – there are no more three-row RXLs available. This will take the form of a new Lexus model on the road. The 2023 RX is built on a new global platform, which is 90 kilograms lighter than the outgoing model. It has the same height and length as the last version, but its wheelbase has increased by 60 millimeters and its track is widened by 15 millimeters at the front and 45 millimeters at the rear for more legroom. in back. The front seats are also recessed for a bit more legroom in the back. The rear seats offer enough space, even if you are six feet tall.

All versions are refined, well-equipped and feature innovative safety and convenience technologies, including a digital key that lets you use your smartphone as a key via the Lexus app. There’s also wireless charging, wireless Apple Car and Android Auto and a smart assistant, which works really well and understands natural language so you can just say ‘Hey Lexus, I’m hot’ and it will lower the temperature a few degrees to cool the cabin.

The 2023 Lexus RX will go on sale later this year. But the RX 450h+ PHEV won’t be available in Canada until later next year. Pricing will be announced closer to the on-sale date.

The traditional Lexus flared tapered grille grows larger and extends to the front bumper. The redesigned rear has Lexus’ unique signature LED light bar on the rear, similar to the NX. On the side, the strong lines are further accentuated by new colors with depth. Copper Crest and Nori Green Pearl, in particular, reflect sunlight differently, changing the color depending on the viewing angle. The RX comes with 19-inch wheels as standard and an option for 21-inch wheels.

As expected from Lexus, a luxurious cabin with a completely redesigned cockpit, dashboard and infotainment system. The largest 14-inch touchscreen available is easier to read than the standard 9.8-inch screen. I don’t like the unconventional door opening mechanism called “eLatch”. It is not ergonomic and inconvenient to use. Often, you have to push it several times to open the door.

PHEV is the way to go, if you can wait. Otherwise, the RX 500h AWD is powerful, fuel efficient and spirited to drive.

Lots of great safety tech, including the Lexus Safety System+ 3.0, which includes the Pre-Collision System with Pedestrian Detection, Intersection Assist and a new Motorcycle Detection feature, Dynamic Radar Cruise Control all speeds with new Curve Speed ​​Management and Lane Departure Alert with Steering Assist. Traffic Jam Assist and Advanced Park system are offered for the first time on a Lexus.

Space is large with 838 liters behind the rear seats. The loading height is lowered to make it easier to load items without straining your back. You can also kick under the rear bumper to open and close the tailgate for quick access.

The RX plays in a crowded segment, but the different electric variants and a Canadian-made badging give it an edge.

The writer was a guest of the automaker. The content was not subject to approval.

Looking for a new car? Discover the new Globe Drive Build and Price Tool to see the latest rebates, rebates and rates on new cars, trucks and SUVs. Click here to get your prize.

Here’s what makes the new electrified Ariel Hipercar so impressive