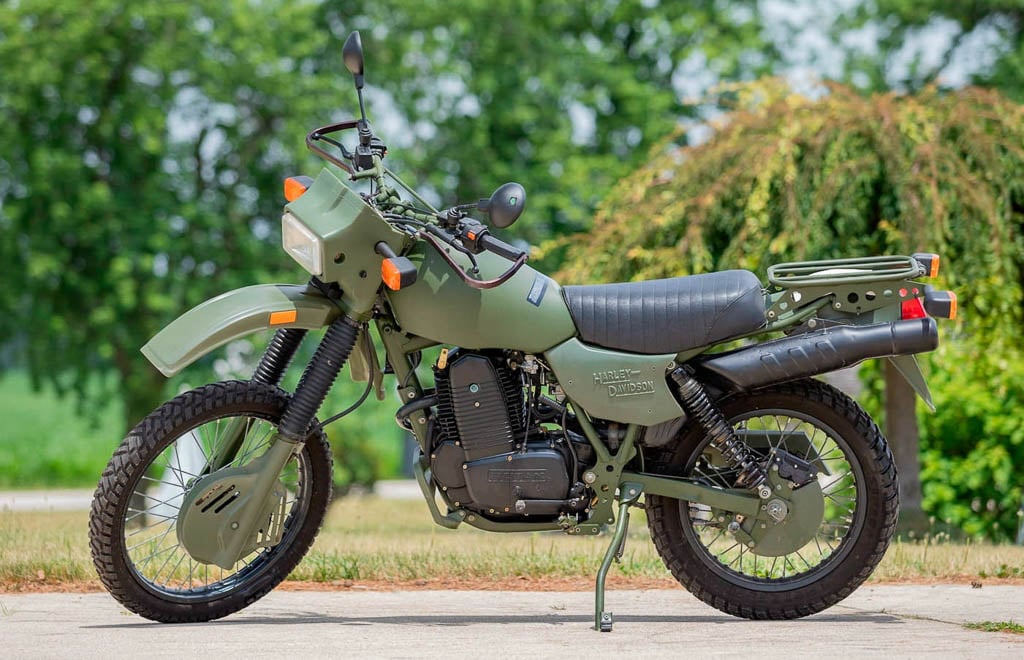 A bike you didn’t know you wanted will go up for auction in Las Vegas on January 27. And yes, it’s a Harley-Davidson, but of an unexpected variety. A drab olive dual-sport built for the US military in 1998. This MT500 (MT for military transport) is one of an estimated 500 produced and – get this – it only has 186 miles on its ticker.

Didn’t you know Harley had its hand in dirt bikes before Pan America hit the scene? Thing is, the Milwaukee-based manufacturer has a long history of making bikes built for unpaved roads (hell, it was all dual-sport in the early 1900s), and supplied the US military with mounts as early as the war. Mexican border in 1916.

At the time of the Pancho Villa conflict, motorcycles had sidecars with rigid machine guns. During World War I about half of the models built by Harley, about 20,000 were ordered by the US War Office. Then came the 740cc WRA model, nicknamed the Liberator, built during World War II. An estimated 90,000 of these machines were built and shipped to American troops and their allies during the last World War.

Harley even went through a phase of building and racing MX bikes in the 1970s when it owned the lion’s share of Aermacchi, the Italian company that would eventually become Cagiva. In fact, one of those bikes from that era, a tiny 1972 HD Baja100 custom, is on the same auction block in Las Vegas a day earlier than the MT500. And more recently, we all probably remember the dubious decision that HD would make for the short-term sub-brand Buell, maker of the Ulysses, a dual-sport travel bike that came out just as the “bike” market adventure” was gaining momentum.

So where is this 1998 MT500 up for auction? Evidently, Harley licensed the military-grade design in the late 1980s from British manufacturer Armstrong-CCM, who originally licensed the same design, called the XN Tornado, from Italy’s Sironi Vergani Vimercate Milano (SWM). Harley sold the rebadged machine from 1993 to 2000.

In all its variants, the rugged and reliable MT500 used the same air-cooled 504cc 4-valve single-cylinder Rotax engine, but while most MT500s produced were kick-started, this low-mileage unit features a electric start. From a deep dive into cycling posted by silodrome, the engine develops a very modest 32 hp at 6,200 rpm with a torque of 28 lb-ft at 5,500 rpm. The weight is said to be 355 pounds.

The bike is equipped with a 5-speed gearbox, chain drive and front and rear 4-piston coated disc brakes. Its cross-laced wheels roll on knobbies, while the suspension is listed as simply a telescopic fork and a dual-shock rear. There’s an olive green rack on the back and what looks like a small toolbox on the right side of the bike, opposite a flat black muffler.

Originally, the motorcycle would have been offered with two plastic cases on either side of the fuel tank to carry documents. There would also have been an optional waterproof rifle case on the right side, rear, as seen on a 1999 unit sold in a Bonhams Auction in 2017 for $18,400.

With such low mileage, the motorcycle auctioned in January was sure to have been in a collector’s hands all these years, and of course its rarity and extreme state of preservation means it will likely remain a piece. static mistress. But all the same, very interesting to see and remember that the world’s most famous heavy cruiser manufacturer quietly contributed to building off-road machines and supplying war equipment to veterans in our county throughout throughout its long existence.

Jamie has been a motorcycle journalist for over 30 years, testing the full range of motorcycles for major print magazines and specializing in stories related to adventure travel. To date, she has written and provided photography for articles describing what it’s like to ride in all 50 states and 43 foreign countries, receiving two Lowell Thomas Society of American Travel Writer’s Awards along the way. Her toughest adventure to date was participating in the 2018 GS Trophy in Mongolia as an embedded reporter for Team AusAmerica.

Cosmo’s Toy Run is gearing up for November 5