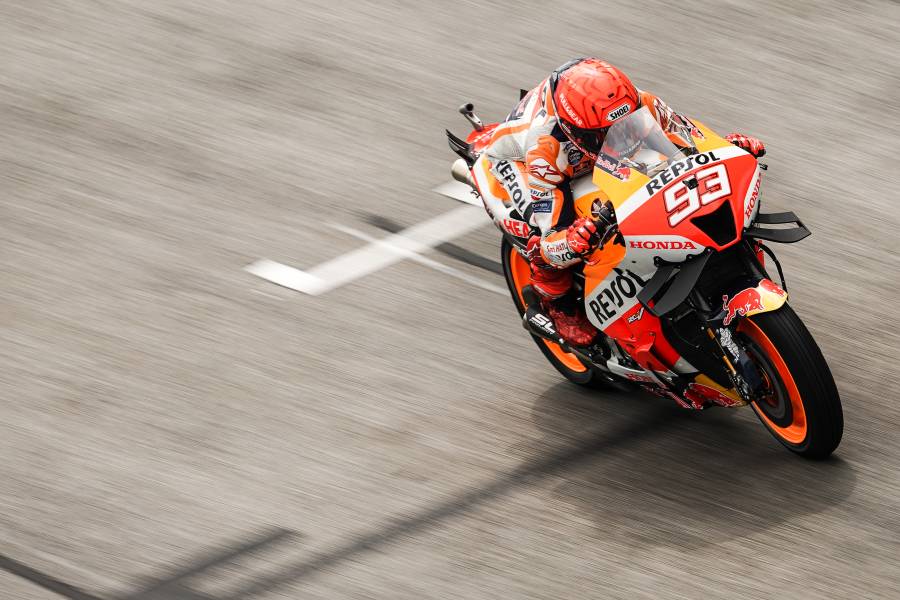 It hasn’t been an easy season for Honda, with its number one driver missing nearly a third of the races as he recovers from another operation on the injury to his right arm that has plagued him since a crash during the first race of 2020.

Last month at Phillip Island in Australia, the 29-year-old Spaniard came within 0.186 seconds of Honda’s first win of the year and his first since the Emilia-Romagna Grand Prix last year. Like Phillip Island, the Ricardo Tormo Circuit is an anti-clockwise track, which suits Marquez as he’s always at his best through lefties, especially now that he’s working to regain full strength. of his right arm.

Marquez returned to racing after a six-race layoff at the Aragon GP in September, following an exploratory outing at Misano following the previous San Marino GP. A week after Aragon, he took pole position in the Japanese GP, proving his remarkable talent and resilience.

Even though Honda’s six-time MotoGP world champion knew he wouldn’t be 100% fit for the final races of 2022, he wanted to return to racing to speed up his physical rehabilitation and help Honda find the best direction of development with its RC213V for 2023. Over the past few races, Marquez has tried several technical updates, including new aerodynamics and a new swingarm, in an effort to improve various aspects of the bike’s performance.

It will be Marquez’s first Valencia Grand Prix since November 2019, when he capped off arguably his best MotoGP season with a 12th win of the year, giving him 88.4% of the maximum possible score. In over seven decades of GP racing, only five top-class drivers have achieved a better percentage. Marquez missed the 2020 and 2021 Valencia races through injury.

His track record is impressive. He won three Grand Prix victories there, the 2014 and 2019 MotoGP races and the 2012 Moto2 race.

Pol Espargaro (Repsol Honda Team Honda RC213V) is contesting his last race with Honda at Valencia, hoping to end his second season with the factory team with a good result. The 31-year-old Spaniard started this season in great style with a podium finish in the season-opening Qatar GP, but has struggled to replicate that performance since.

However, the former Moto2 world champion has a strong points finishing streak, with points taken in the last five races, so he will want to continue this race and try for a top ten finish. His record in Valencia includes three podiums in MotoGP and two in the old 125cc class. Espargaro missed the Valencia race last year after suffering a heavy crash on Saturday.

Alex Marquez (LCR Honda CASTROL Honda RC213V) also races in his final race for Honda on Sunday to complete a third consecutive year on RC213V machinery. Marquez moved to MotoGP in 2020, having won the 2019 Moto2 championship, five years after winning the Moto3 title with Honda. He secured his Moto3 crown at the traditional Valencia season finale.

The 26-year-old Spaniard has two MotoGP podiums with Honda and had some good races this year, including the dry Portuguese GP in April, where he finished seventh, and the wet Thai GP last month, where he took eighth place.

Takaaki Nakagami (LCR Honda IDEMITSU Honda RC213V) plans to return to action this weekend, after missing the last three races following surgery on his right hand, to repair damage sustained in an accident during the GP of ‘Aragon. Nakagami is flying to Spain from Japan, where he had the surgery a month ago and has been recovering ever since. He will undergo a medical check before being cleared to start testing on Friday morning.

The 30-year-old from Chiba has shown great speed at Valencia in the past. In 2020 he qualified first for both Grand Prix events on the track, finishing fourth, less than a second off the European GP podium, and battling for a podium at the Valencia GP before to slide.

Valencia, near Spain’s Mediterranean coast, hosted its first Grand Prix in 1999 and has closed the MotoGP world championship every year since 2002, with the exception of Covid-hit 2020, when the circuit staged two rounds before the End of season Portuguese GP. The venue is hugely popular with fans, as the expansive grandstands that surround most of the track allow spectators to see the entire layout.

The circuit is tight and twisty, so riders need their bikes to be very maneuverable, so they can make quick changes of direction. Power and excellent anti-wheelie control are also key, as riders enter the long 0.876 km / 0.544 mile start/finish straight at low speeds, so they must accelerate through all gears to a speed maximum of around 332 km/h / 206 mph.

MotoGP riders and teams are literally getting a day off before starting their preparations for the 2023 season. The one-day test in Valencia next Tuesday will include Marc Marquez, his new teammate Joan Mir, winner of the 2020 MotoGP title, Nakagami and his new teammate Alex Rins.

Following this exit, the paddock will wait until early February for the first tests of 2023 in Sepang, Malaysia. The 2023 MotoGP World Championship will kick off with the Portuguese GP at the Algarve International Circuit on March 26.

Cosmo’s Toy Run is gearing up for November 5