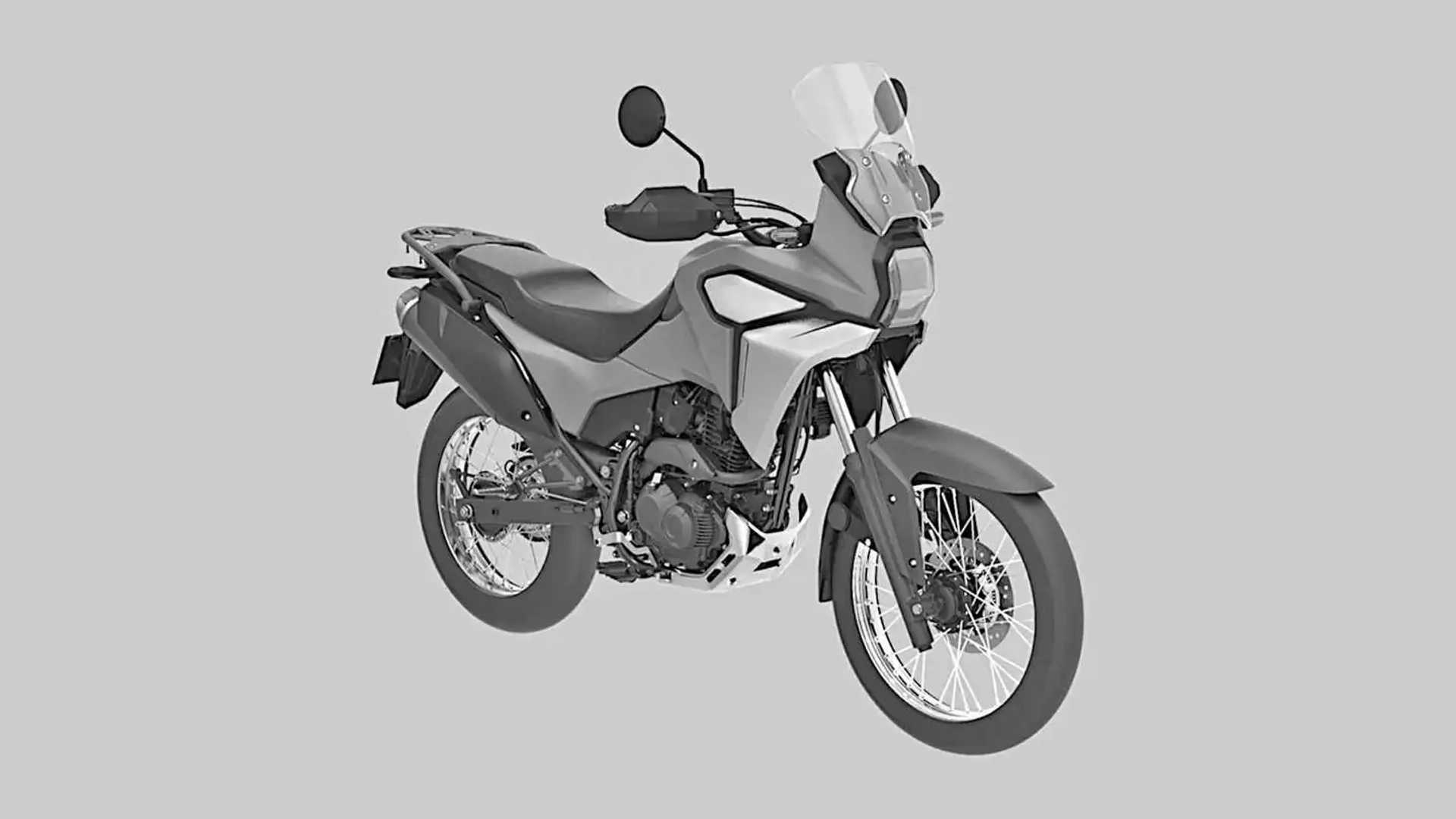 In December 2021, Honda Motor Company filed a handful of designs for what appears to be a smaller-displacement NX model with the European Intellectual Property Office (EUIPO). These were marked “registered and fully published” with the EUIPO as of January 11, 2022, with an expiry date of December 17, 2026, five years after the date of the first filing.

While these design documents don’t tell us everything about Honda’s upcoming NX-series dual-sport relaunch plans, they do give a glimpse of how the next NX family might look. The design here shows off a single-cylinder engine, wire wheels, slick tires (no knobbies), skid plate, handguards, high-mounted straight exhaust, and a rear rack mounted behind the passenger seat.

The square headlight, hood and front fascia show stylistic nods to the NX’s past, while maintaining a modern enough look to draw the line between what was and what could be. There’s a small windshield up front that looks like (but isn’t an exact copy) of the ADV150. The shape and placement of the exhaust clearly echoes the design of the NX past, while simultaneously taking that idea and giving it a more streamlined and modern look.

There’s plenty of room on the handlebars to mount all the electronic gadgets a rider wants, and the ergonomics feel upright and quite comfortable. The hood comes to offer a bit of sun visor to the digital display, which can also only be a good thing for cyclists. It’s unclear at this point how dual-sport compatible modern interpretations of the NX will be. Still, whether you’re riding off-road or on-road, blinding sun can definitely be a problem if you can’t see your screen when you need it.

The tires featured in this design appear to be more road oriented and slicker tires, and 2022 is most definitely part of an era where there are a lot of bikes with ADV inspired looks that aren’t really intended to do a lot of off-roading. Honda already has some of these, as well as a good range of bikes (and scooters) aimed at light off-road work.

This is all speculation, but if Honda is planning a range of NX bikes with multiple displacements – and in different markets – it’s not hard to imagine some of the smaller ones being more road oriented and, say, a 500 being more truly dual-sport oriented. Honda already has the CRF300L/Rally as a true dual-sport, so an NX in this line that gets more road time seems reasonable.

Likewise, while the CB500X has become a little more dual-sport capable with its latest update, we could see a future NX500 leaning a little harder into off-road chops as a nice alternative. If you’re an OEM like Honda, after all, you want to try to hit as many different types of riders as possible with something they want, right? As always, though, we’ll have to wait and see what actually materializes in the future.