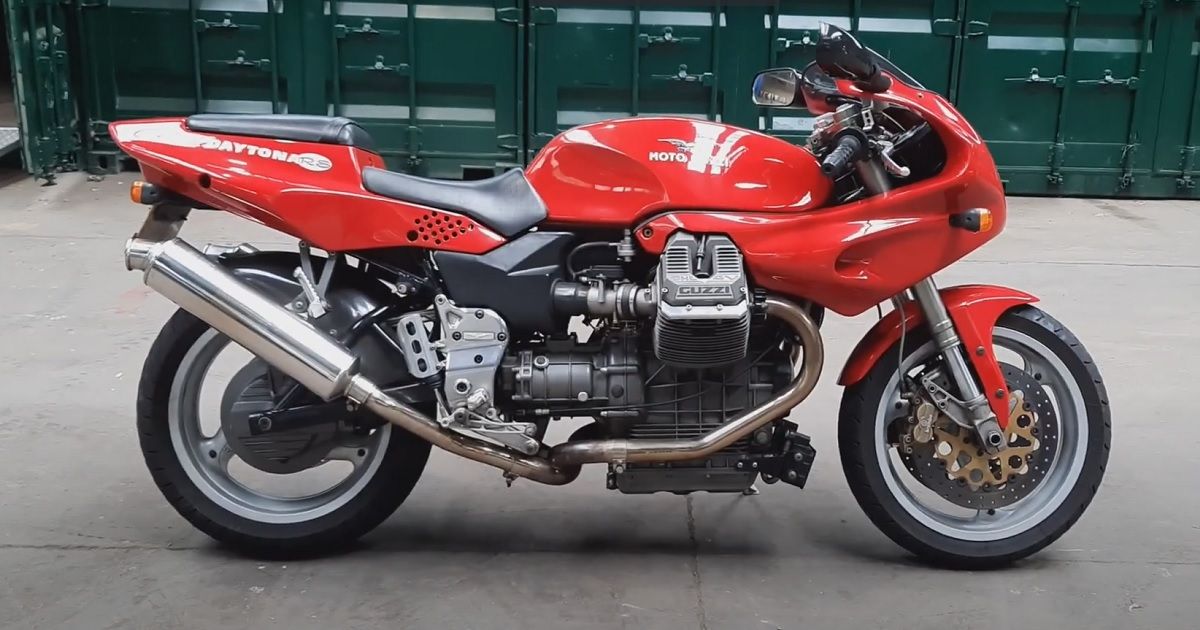 Finding the perfect compromise between comfort and sport is almost impossible when it comes to cars, but for motorcycles, that’s another story. And the Moto Guzzi Daytona RS is the best example of what you get with equal parts of the two.

The RS version debuted for the 1997 model year and gave the rest of the Italian sports bike segment a run for its money, putting its 102bhp four-stroke V-Twin engine to work with a myriad of other fantastic pieces.

The culmination of its sexy yet striking Italian design, exquisite engine and handling made the Daytona RS one of our favorite bikes of the mid-90s and unquestionably became a classic bike in every sense of the word.

There is a lot to see, hear and touch about the Moto Guzzi Daytona RS and in light of its dazzling presence in the motorcycle community, here is everything we love about the Daytona RS models from 1996 to 1999.

Modern motorcycle design began to take looks from all eras and combine them with 21st century technology to create some of the most unique motorcycles we have ever seen. But what the Daytona RS did in the ’90s was predict the future rather than recreate the past.

Its sophisticated design (by modern standards) captured the military bike aesthetic that BMW has retained over the decades, but also exploited the modern superbike look we all know and love. The only catch was that the Daytona RS didn’t have a post-2000 superbike to emulate, which makes its bulky center section and sleek rear end all the more impressive.

The V-Twin engine sitting under the rider has more presence than almost anything else on the bike. Italians love to show off their engines, both on motorcycles like the Daytona and in the automotive industry. The four-stroke protrudes under the gas tank, appearing to be ready to run 90 yards for a touchdown.

The lack of body panels on the bottom half of the bike may look slightly out of place, but we assure you that only makes it look better. The display of the engine and gearbox housings showcases the fine mechanical work of the Daytona RS while greatly facilitating troubleshooting.

RELATED: These Are The Most Amazing Italian Motorcycles Ever

The Daytona, by modern standards, doesn’t run with a ton of power or torque. But in terms of rpm, sound and cohesion, the V-Twin four-stroke engine offers the perfect compromise between instant torque and naturally built premium power.

The RS version of the Daytona is the one you really want as it gives you forged pistons, upgraded stems, and a lightweight flywheel, making those changes even crispier.

The fuel injection system pumps fuel into two injectors, one for each piston. Another feature we love is the Daytona RS’s four valves per cylinder, putting most touring bikes in the world to shame.

Its engine produces maximum power (102 hp) at a respectable 8,500 rpm and maximum torque (64.9 lb-ft) at 6,500 rpm. At low throttle, the Daytona RS’s engine makes a truly magnificent exhaust note – hoarse but extremely smooth. And when you ask for more power, it immediately gets angry, almost as if the sound described above is filtered through a trumpet.

And speaking of exhaust, the Daytona RS has tasteful carbon fiber end caps at the end of a well-breathable pipe system. Not too much carbon, but not too little. Once again, the Moto Guzzi Daytona RS brings a modern touch while delivering classic and reliable performance.

RELATED: Ranking The Fastest Italian Superbikes Ever Made

Up front, the Daytona RS has the dubiously named White Power suspension forks connected to a full floating disc brake setup that includes Brembo calipers and an alloy front mount. The suspension forks are adjustable in rebound and compression.

The discs are 320mm in diameter with 2 piston calipers on each side. The 488-pound bike comes to a quick stop with its Brembos, but is still controllable under deceleration.

The Daytona RS also featured shaft drive, a bonus for sports bike enthusiasts and a common attraction for these Guzzi bikes. Not all Guzzis had a shaft drive, but the sporting character of the Daytona RS simply had to have it from the factory.

The motor is connected to a five-speed dual-disc dry transmission that shifts smoothly thanks to Guzzi’s improved drive components. Clicking through its five gears at full throttle, the Daytona RS hits 60 mph in just 3.8 seconds and covers the quarter mile in just 11.8 seconds.

Top speed is reported 149 mph. Far from the capabilities of today’s superbikes, but the Daytona’s powertrain makes spirited driving on a side road much more comfortable and rewarding.

Here’s everything you need to know about Alpina

Alpina is a luxury brand that works with BMW to build luxury sports cars.

Max Larsen has worked, driven and rubbed shoulders with cars all his life. He’s been a daily automotive journalist for quite some time and specializes in Porsches, but make no mistake about it. He grew up with old American cars and became something of an omnivore. As a major journalist, classic rock snob, and car enthusiast, he now writes for HotCars.com.

10 anime characters who would be experts with ODM Gear