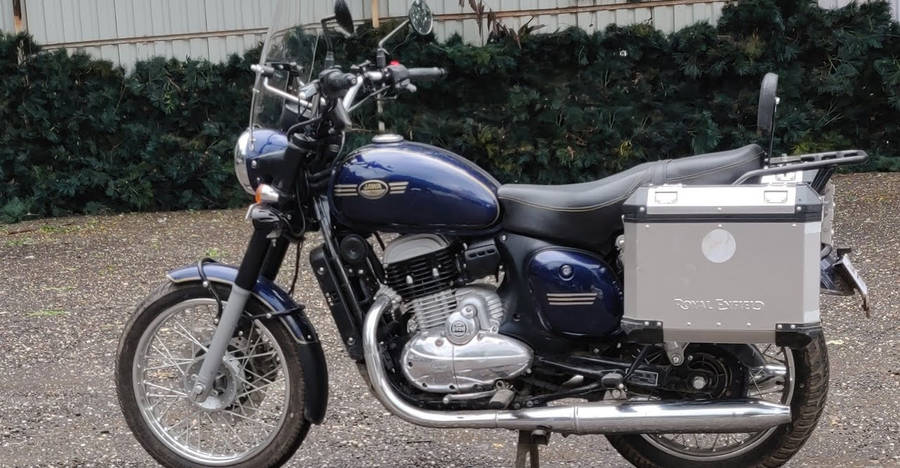 Here is a retro Jawa Forty-Two motorcycle modified for touring

The Jawa Forty-Two and Jawa Classic helped re-establish the Jawa brand and the iconic name is back in full force. The bikes have received a fairly good response from buyers and enthusiasts alike. The Jawa Forty-Two, in particular, has grown in popularity. As with every new bike that becomes a hit in the market, aftermarket accessories and modifications for Jawa motorcycles began to be rolled out in abundance. Along with the official accessories offered by Jawa, we have seen a few Jawa Forty-Two bikes fitted with aftermarket accessories that look pretty good. The video below by HDT Customs shows a Jawa Forty-Two motorcycle which has been fitted with custom touring accessories to improve its practicality and comfort during long journeys.

Finished in Nebula Blue, this bike already looks pretty good, but with all that kit installed on it, its practicality has increased by a few notches. Speaking of the modifications to the bike, there haven’t been any significant modifications or other performance improvements on this bike. Rather, the focus has been on creating a tourer-style bike that perfectly retains the original Jawa Forty-Two DNA.

The first thing that has been revamped here is the saddle. For touring bikes, the saddle / saddle should be comfortable enough to prevent rider fatigue. A personalized saddle was therefore installed on the bike, well padded and even equipped with a backrest for the passenger. The next change, or rather the addition, are these large saddlebags that have been mounted on custom saddlebag racks. The owner of this bike also owns a Royal Enfield Himalayan that the same saddlebags are mounted on and therefore wanted the Jawa to sport similar mounts so that the saddlebags could be easily swapped out as needed.

To continue, the bike was installed with a large windshield in the front to cope with high speed gales. In addition, the handlebars have been replaced with a large cruiser-style unit which improves comfort during long journeys. These two components were chosen on a UM Renegade Commando motorcycle and then installed here. The set is completed with auxiliary lights which provide improved illumination in the dark.

Speaking of the Jawa Forty-Two, it is powered by a liquid-cooled 293cc single cylinder engine that generates a maximum power of 27hp and maximum torque of 28Nm. It is the highly modified version of the engine powering the Mahindra Mojo and incorporates many modern engineering features compared to the engine of the Royal Enfield Classic. Jawa Forty-Two with single channel ABS is priced at Rs. 1.55 lakh. The dual channel version costs Rs 1.64 lakh.