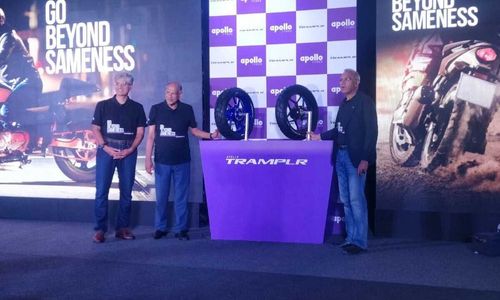 Apollo Tires has launched its new Tramplr range of enduro and dual-sport tires for high-end motorcycles. The Apollo Tramplr series is divided into two models – XR and ST. The Tramplr XR is the all-terrain tire and is designed for motorcycles in the 250-500cc range. Its price is between Rs. 6,500 and Rs. 12,000 for a set. Meanwhile, the Apollo Tramplr ST series are street oriented tires and intended for motorcycles between 150 and 250 cc. These are priced at Rs. 4,500 to Rs. 6,000 for a set.

According to Apollo, the premium motorcycle segment comprising touring sportsmen, adventure travellers, cruisers and street sport bikes contributes about 20% to the motorcycle market in India. The Tremplr range has been designed and developed in India at Apollo’s global R&D center in Chennai, with production taking place at the company’s facilities in Vadodara. Gujarat.

Speaking at the launch event. Satish Sharma, President, Asia Pacific, Middle East and Africa (APMEA), Apollo Tires Ltd. said: “The changing consumption pattern of Indian consumers, along with the increase in the enthusiast segment of adventure-seeking cyclists, has led us to give them new shoes to do more with their current set of motorcycles. While we used to focus on products with radial steel technology for high sporting performance, we are now pushing the limits to move towards the sport and adventure tourism segment.

The Tramplr XR will come in a variety of sizes that will be available for motorcycles in the Yamaha FZ25, Royal Enfield, Honda CB200X range, KTM motorcycles, BMW Motorrad, Bajaj Dominar and more. The tire receives distinctive elements like the compass sign printed on the tread, as well as some adventurous places of Ladakh, printed on the sidewall. The tires are constructed using zero degree steel radial technology for higher structural strength, while they are also equipped with rock ejectors, tire wear indicator and cross grooves open to remove water and prevent aquaplaning. The Apollo Tramplr XR tires also feature large blocks and extra-long shoulders for extra grip.

The Apollo Tramplr ST is more road focused and offers better levels of grip on tarmac. Like the XR, the Tramplr ST also comes with street print on the treads as well as sidewall graffiti. The ST tires also feature a different tread pattern and unique sipes for better wet grip in the city. The all-season tire also offers plenty of grip in lightly muddy terrain with large center blocks and a wide footprint. The tire also comes with stone ejectors, W-shaped grooves to evacuate water and a tire wear indicator. Apollo also says the tires offer low rolling noise. The new Tramplr ST can be mounted on bikes like the Bajaj Pulsar, TVS Apache range, Yamaha FZS and MT15.