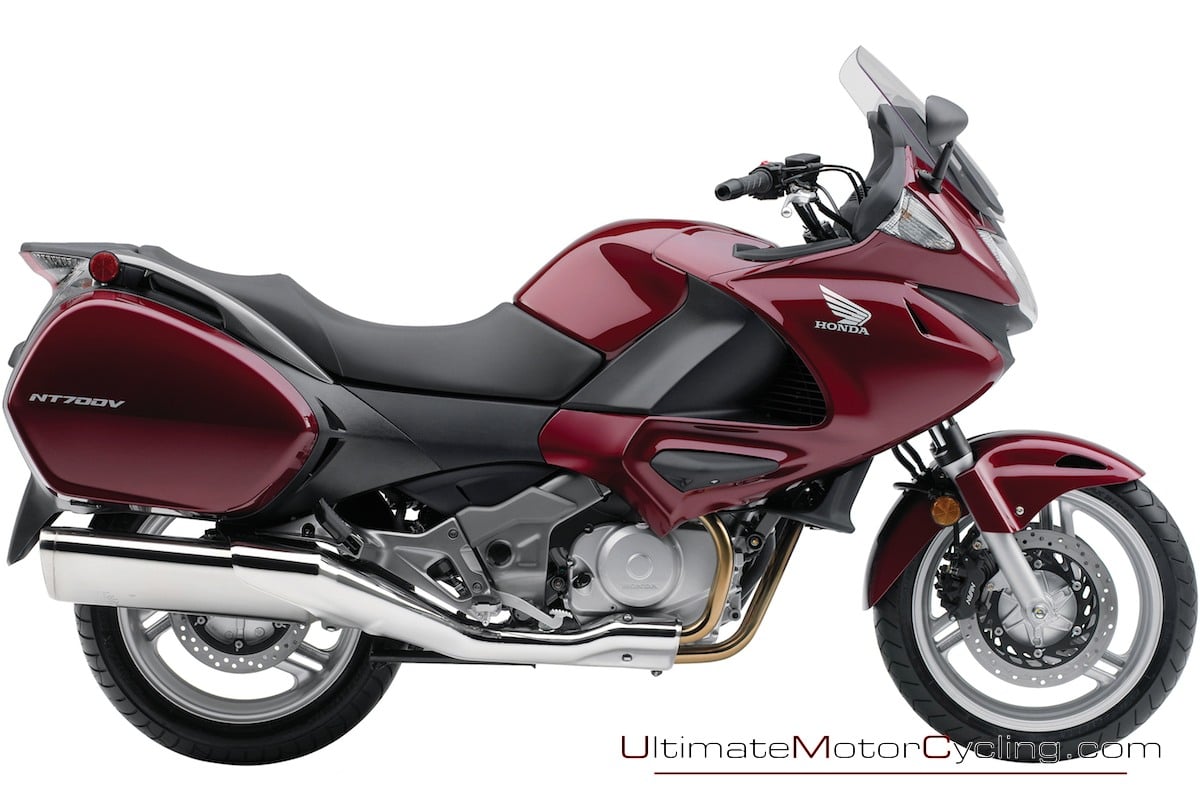 Racing across Europe for the past decade was a touring motorcycle with a pitiful name – the Honda Deauville – but an appealing skill set for the solo sport touring enthusiast.

Powered by a venerable Honda V-twin with roots tracing back to cult favorites of the 80s, Honda Hawk GT and Transalp and the high-tech DN-01, the 2010 Honda NT700V is an almost magical motorcycle, save for a default, but we’ll get to that later.

For those who think the Gold Wing is too heavy and the ST1300 is too heavy, the NT700V brings the touring back to basics. Lacking in extensive technology, the NT exists as a motorcycle with one simple goal: to get you there comfortably and competently.

It’s a bike that’s right at home on the commute to work, using its narrow profile integrated saddlebags to make it easier to split lanes, as is the case on rough back roads that rewards agility and good suspension.

Don’t hesitate to take it on wide open highways, as the 700 has plenty of power to grab onto 18-wheelers and SUVs.

The NT700V’s torque distribution is as wide as its operating range, making the five-speed transmission adequate, although we’d like to see sixth-speed overdrive. There are no knocks or dips as it goes from idle to a red line of 8,500 rpm.

It’s an electric feel, although the 680cc, SOHC, 4vpc V-Twin has enough power pulses to remind you that internal combustion is occurring. With a full body and a large triangular muffler, propulsion noise is minimal.

The seats are just south of vertical on the NT, thanks to a slightly extended reach from the wide bars. It is a perfect semi-attack position reminiscent of the sporty incline of the 700.

The NT isn’t the kind of bike you plan to throw like a CBR, but it’s also not hampered by too limited cornering clearance or weird handling quirks.

On the contrary, the NT700V can be criticized for being as boring as its name overseas. By boring I mean there are no surprises. Everything the chassis and engine cooks up is 100% predictable and expected.

Nothing comes from left field. There is no push or oversteer when cornering. The tires never threaten to come off. Oscillations and tremors do not exist. The NT is extremely stable in a straight line, but not at the expense of proficiency in the turns.

The Honda’s suspension cannot be called sumptuous, nor is it decidedly sporty. The units are clearly not top of the line, but they do well with less than five inches of stroke on either end.

There is no excessive diving when you pull firmly on the brake lever, operating both the front 296cc discs and the rear 276mm. Interestingly, all three calipers are six piston models.

One of the reasons for the lack of diving is the combined braking system that links the three discs together, intelligently actuating the different combinations of pistons when you operate the pedal or lever.

I came to appreciate how easy it was to just use the pedal in all cases except when I was weathering in the canyons. There is also an ABS option, but this bike didn’t have one.

At 562 pounds with the full 5.2 gallon tank (claimed weight), the NT is light for a touring bike, and much of its weight is carried low.

Considering its intended use, it is quite agile. If you’re carrying a passenger, a large button makes changing preload almost as easy as pushing a button.

To cross the country by bike, comfort is essential. The NT seat is wide and offers good support without forcing you to take a position. The vibrations of the V-twin are there, but not too tiring. The wind doesn’t bother the bike much.

The windshield is manually adjustable to five positions, although most of the time most people probably prefer the lowest setting. The controls are light and have a good feeling. Mirrors give you a good idea of â€‹â€‹what’s going on behind you.

The styling is plain enough, giving it an under-the-radar feel that will likely match the quiet confidence a typical buyer will have in their choice of motorcycle.

While the NT is more appreciated by an experienced pilot, it is also perfect for a newer pilot (who is not interested in customs) looking to enter the tourism market.

As a bonus, there are plastic rollover guards that can prevent costly bike damage if the bike falls at low speeds. An unnamed junior staff member tested this feature in a photoshoot and the protection system did its job well.

So I established that the Honda NT700V is an almost perfect touring machine, with a chassis and suspension that appeal to both straights and canyoning enthusiasts.

Given that, you would think I would get on the bike tomorrow and ride from the Pacific to the Atlantic without a second thought. And, I would, except for that fly in the ointment that I alluded to in the opening paragraph.

The bags from the NT700V seem to hate me. This is particularly annoying as there are a number of great things to say about the bags. On the plus side, the bags are beautifully integrated into the bike, keeping it nice and slim. They have a decent capacity and a through tube so you can carry something long and narrow, like a loaf of French bread. Great.

The problem is in the locking system. It’s very complex and quite picky. On three different occasions I have had lockdown failures – and the failure was different each time. A failure undermined a vacation trip because the bag’s keyhole was firmly hooked on the key, as it would not release it unless the bag was locked, which it would not do due to a broken spring.

A second failure happened in the middle of nowhere. In this case, the spring slipped off the latch, so it did not close. I had to go back to civilization with the bag open.

Finally, and it was the last straw, it just opened up onto the freeway, and a $ 5,000 camera was hanging from a strap. The lock lever was not functioning properly in this case – it pretended to be locked, but it was not.

Looking at the design of the Honda NT700V bags, it’s hopelessly complicated, especially compared to something like an Aprilia Mana GT 850, where all the hardware is external.

The bags are nice to look at, but there’s no way to be sure the puny latches and springs are in place and doing their job. A reliability issue like this is very different from Honda and makes it hard to feel confident about loading anything into the bags (which could use a liner as well). It is an issue that we would very much like to see resolved.

Bags aside, the Honda NT700V is a perfect solo touring bike. It has great comfort, adequate power, predictable handling and a very presentable appearance.

It’s certainly not the most exciting Honda touring bike, but it’s a bike that many riders would do well not to overlook, but just keep an eye out for those latches.