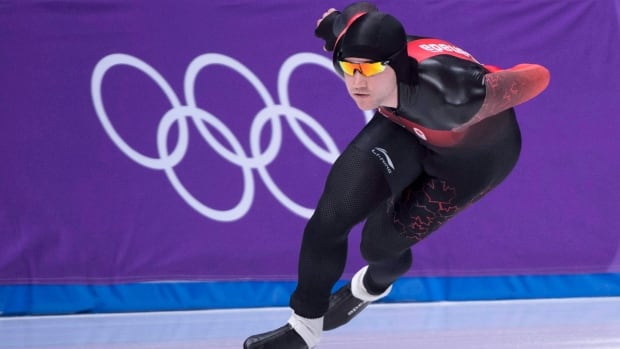 A mixed Olympian competing in both the Summer and Winter Olympics will typically have 18 months to train between Games. But the global pandemic has reduced this already grueling task to just 180 days.

There were three athletes who competed in Tokyo in July/August last summer who had already competed in the 2018 Winter Olympics and had realistic chances of doing so again in Beijing.

Vincent De Haître from Canada (cycling and speed skating), Ayumu Hirano from Japan (skateboarding and snowboarding) and Pita Taufatofua from Tonga (taekwondo and cross-country skiing) all competed in Tokyo and had the opportunity to represent their country only six months later in Beijing.

But the paths taken by these three athletes after the end of the Tokyo Olympics diverged considerably.

De Haître is going through an unusual training cycle

Already a two-time Winter Olympian in 2014 and 2018 in the 1000m and 1500m long track speed skating events, De Haître helped Canadian cyclists set a personal best in the team pursuit and finish fifth in the Tokyo Olympics.

Being a dual-sport athlete takes its toll on the body, and the six-month turnaround took its toll on 27-year-old De Haître.

“With back and forth [between cycling and speed skating]Vince suffered several serious back injuries,” Aly Hodgins, physiotherapist for Cycling Canada, told Radio-Canada. “If we hadn’t managed them well, it could have been a problem in the future.”

It was a year before the Tokyo Olympics that De Haître decided he wanted to try to qualify in cycling, a sport in which he had competed internationally for seven years.

WATCH | De Haître embarks on a journey to compete in the Summer and Winter Olympics 6 months apart:

Two-time Olympian Vincent De Haître of Cumberland, Ont., says splitting his time between 2 sports, speed skating and track cycling, can be a challenge, but that’s what makes it so fun. 1:14

Like De Haître written in May 2020he wanted to “face this hurdle head-on and bet on myself as an athlete”, training for both sports and communicating with both national teams to achieve his goal of competing at both Games.

“When I see him doing the warm-ups and stuff, I’m immediately like, ‘Oh, he’s doing weird stretches in speed skating or something,'” teammate Derek Gee told Radio-Canada. “He’s definitely a very different athlete to any of us. [on the cycling team]. I wouldn’t call him so much an outsider because he knows cycling very well.

“He’s been cycling his whole life, we were teammates together when we were really young, but he certainly has a different background than anyone else.”

This path was short on the road to Beijing.

It all started in Calgary at the 2021 Canadian Long Track Championships in October, where De Haître battled a strained groin he suffered during warm-ups to finish second, an unthinkable feat considering he jumped from his bike to the Olympics just 72 days earlier.

“He was a bit ahead of what we expected,” Bart Schouten, coach of the Canadian long track speed skating team, told Radio-Canada after seeing De Haître on the ice for the first time. . “In testing in October, he outplayed some people who we knew skated really, really well.”

Ottawa multi-sport athlete and three-time Olympian Vincent De Haître is no stranger to competing on the biggest stage in the world. 1:38

Despite the effort, the competition for the Canadian team was fierce and the team from Cumberland, Ont. native finished just short of his goal of making the team when it was announced in mid-January.

“After leaving speed skating for three years, I went the distance with the best in this country and finished second at the Canadian Championships,” De Haître said on his Instagram after being named a non-traveling replacement for the 2022 Olympic team.” My World Cup results just weren’t what they needed to be, leaving me as an alternate for the 2022 Olympics.

“It’s a win for me! I took on an impossible challenge and fought hard until the end.”

23-year-old Hirano had a nearly 20-year-old dream come true when he fell on his skateboard during the Tokyo Olympics.

While the Japan native rose to prominence on the slopes as a double silver medalist at the 2014 Sochi Games (when he achieved the feat of being the youngest Olympic medalist in snowboarding at just 15 years) and at the 2018 PyeongChang Games, he started skateboarding at the age of four, just before taking up snowboarding.

“Now that skateboarding has become an official event for the Tokyo 2020 Olympic and Paralympic Games, I couldn’t let it go,” Hirano told asahi.com in November 2018, just nine months after earning his second Olympic medal. snowboarding money in PyeongChang. Games.

With the Tokyo Games being pushed back a year, it gave him more time to prepare for the inaugural skateboarding event at the Olympics, but it also delayed the start of his training for Beijing, which he has had ample opportunity to do while preparing for both. the 2014 and 2018 Games.

“There’s not a single day to lose,” Hirano told Olympics.com, less than a month after the Tokyo Games. “But I don’t feel like I’m against anybody. I feel like it’s about challenging me.”

Nonetheless, the Murakami native still enters the halfpipe competition as one of the favorites, alongside Australian Scotty James, Japanese Yuto Totsuka and 2018 US gold medalist Shaun White. He will also compete with his two younger brothers, Kaishu and Ruka.

“For a while, I’ve been away from snowboarding,” Hirano told USA Today after finishing 14th in skateboarding qualifying in Tokyo. “Everyone is at their highest level, and how I’m going to recover is a challenge.”

The snowboarding prodigy warmed up quickly heading to Beijing, landing the first-ever triple cork on the Dew Tour in December, as well as a silver medal at the X Games in late January.

The shirtless flag bearer carries a noble cause in 2022

When the opening ceremony began Friday evening in Beijing, the absence of Taufatofua was already felt.

The shirtless Tongan flag bearer who has made a name for himself at each of the last three Olympic opening ceremonies unfortunately did not return to his role on Friday, but it was for an honorable reason.

On January 15, the Polynesian nation of Tonga was devastated by the eruption of an underwater volcano, causing damage to the archipelago and cutting communications with the country, delaying relief efforts.

WATCH | The eruption of an underwater volcano devastates Tonga:

Reconnaissance flights from Australia and New Zealand revealed the extent of the damage in Tonga from Saturday’s massive volcanic eruption and tsunami. Damage to airport and communication cables hamper relief efforts. 3:43

With the Beijing Games on the horizon, the direction for one of only two Tongan athletes to ever compete in the Winter Olympics was clear. Taufatofua quickly took to social media and launched a fundraiserwhich to date has reached over AU$800,000 on its $1 million goal.

The three-time Olympian has quickly transformed the platform the Games have provided him since his first appearance at the 2016 Games in Rio de Janeiro into a vehicle for raising awareness of the natural disaster.

“I got a message from a lady in Japan, and she was like, ‘You waved at me at the Tokyo Olympics and now I’m returning the favor. [by donating]”,” Taufatofua told Olympics.com in mid-January. “And I sat there and I thought, I waved. I have to start saying hello to everyone.”

Taekwondo…
…cross-country skiing in the snow! ❄
Pita Taufatofua from Tonga has brought sportsmanship 💪and showmanship 😉 to the last three Olympic Games!

Who will steal the show at tonight’s opening ceremony? 👀#StrongerTogether | @pitaTofua pic.twitter.com/6AaFJcJYSQ

Although the Olympics are on the back burner for the 38-year-old, they are certainly not forgotten.

“My focus right now is to make sure we can help rebuild Tonga and then my energies will go back to the Olympics,” he told Olympics.com.

A closer look at the WK Scrambler 50